IBM Notes (formerly Lotus Notes) was first released in 1989 and by far it is still one of the most used email clients. Furthermore, IBM Notes is a Client-Server platform-based application where IBM Notes is the Client, and IBM Domino is the Server. It is used by many organizations for e-mailing, maintaining calendar, scheduling, maintaining address books, databases as well as for other needs such as web-server managing and programming.  Its unmatched security through encryption in e-mail storage adds to its merit. IBM Notes uses NSF files to maintain and store data and there are many variations of such files. In this article, we are going to learn about the evolution of Lotus Notes, NSF File and its types, and the purpose of these files in detail.

IBM Lotus Notes, initially developed by Lotus Development Corporation was released in 1989. Lotus Notes is a client-server cross-platform application which provides us an interface between IBM Lotus Notes and Domino Client. But you can use it as an email client without the Domino server as well.

IBM Domino Server supports SMTP,  POP3, and IMAP mail clients, and via DAMO (Domino Access for Microsoft Outlook) which is an important part the 6.5.1 platform (released in September 2003).

Upon its initial release, the term ‘Notes’ was used to refer to both client and server applications. In 1995 IBM acquired Lotus Development Corporation. In 1996, Lotus released an HTTP server add-on called ‘Domino’ for Notes 4 server so as to allow the  Notes documents to be rendered as web pages in real-time. Since then the entire server program was re-branded as Domino and the client kept its original ‘Lotus Notes’ name.

On 21st March 2013, IBM released the client Notes version 8.5.4 rebranded as a full version release of   IBM Notes 9.0 . This new version of IBM Notes had many changes and additions including the updated GUI,  update to iNotes, and the IBM Notes Browser Plug-in.

While the future of any product in the technology sector cannot be predicted, Announcements made by IBM speculate that it will continue its research and development on the IBM Notes and Domino product line. Public timelines have shown that IBM would continue such research till 2021.

What is NSF File?

NSF files are the IBM Lotus Notes database files and these files store important and useful data. There are various types of NSF files like Names.nsf, Archive.nsf, Bookmark.nsf, etc. These files contain particular data of their respective domain and maintain data by constantly updating, saving and overwriting themselves with newer data so that IBM Notes can function properly.

There are various file extensions of IBM Notes.

Recommended Blog: How to Import Lotus Notes To Thunderbird Flawlessly

What are the various types of NSF files?

Any IBM Lotus Notes database consists of the following files:

All of these files store data pertaining to various aspects of IBM Notes these files keep changing and updating with newer data.

What is the purpose of these files?

As mentioned earlier, each of these files contains specific data pertaining to specific aspects of IBM Lotus Notes. Now let us study in brief about some of these files.

Names.nsf is without doubt one of the most important IBM Notes database files and it stores Contacts in IBM Notes. Installing IBM Notes in the machine creates Names.nsf (also known as Address Book) on both client and server database files.

Names.nsf basically stores all the contact information hence the user does not require to remember the ID of the recipient. Users can even modify and delete information as per their requirement. No storage restriction ensures that you are able to store as many contacts as you desire.

It is an important file as you need Cert.ID file to add resources to the organization like Users, Servers, etc. Since it stores data like name and associated certificates in a hierarchical manner,  this means if we lose access to this file, we need to rebuild the entire organization.

When IBM Notes communicates with the Domino server, two essential security techniques Validation and Authentication begin their working. These systems confirm the data connected with the client’s ID file to as legal or not.

Hence, your User.id file act as your identification and this file contains the information that IBM Notes email client uses to identify a registered user.

The name of the file is self-explanatory that it used to keep information about all the database links which Notes user bookmarked on the sidebar. It is important to file in IBM Notes as Bookmark.nsf allows the user to link important information.

This file keeps the cached copy of elements such as IBM script libraries, forms, Subforms. And furthermore, also contains navigators of databases placed on the Domino Server. Cache.ndk is present in a Data Directory folder and it caches only one copy of design element. If duplicate versions the same design exists, it deletes one.
The default size of this file is 5 MB yet, you may increase or decrease the file size as per your need. You can recreate this file by deleting this file a restarting Notes.

The Log.nsf is one of the important files of IBM Notes as it contains detailed information regarding the Domino system. This file is created automatically when you use  Domino for the first time. It is placed on the Domino Server and keeps the record about all the major activities occur on the system.

You can find all the information about server activity, database and the number of users registered in the Log.nsf file. This file is used to control Log file size, view the file, find out the Log file and to store any additional information in the file.

IBM Notes Archive.nsf contains archives of mailbox messages. Archive process copies old Lotus Notes emails into a different location on a computer if IBM Notes runs out of space. It enhances the performance of IBM Notes and provides free space to your IBM Notes account.

Desktop8.ndk keeps the cached copy of those items in databases that any you access through bookmarks. In the prior editions of IBM Notes, Desktop8.ndk file was termed as Desktop.dsk.

Deleting Desktop8.ndk recreates the file automatically when you start a new session of IBM Notes. The new data replaces the old data stored in the file.

Headline.nsf stores all the headlines database. This file is in Data Directory folder of Lotus Notes and is created automatically by the Headline.ntf template.

It also allows the user to get real-time updates also.

IBM Notes or Lotus Notes is a client-server software platform and is used by many organizations. It has evolved a lot since 1989. Because of its unmatched security through encryption, IBM Notes is one of the most used e-mail clients.  In this article, we have discussed the evolution of Lotus Notes to IBM Notes, NSF files, its types, and the role these files play in maintaining IBM Notes Database. 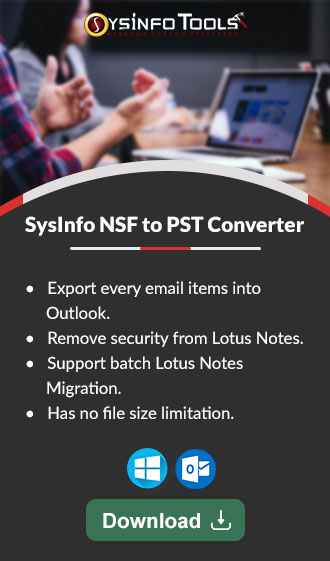