What does Raid Hard Drive Mean ?

RAID (redundant array of independent disks) is a storage solution that was formerly known as “Redundant Array of Inexpensive Disks”. It is a technology for storage virtualization that incorporates numerous hard disks into a single logical unit to improve the data redundancy and performance. It saves data in mirrored and striped mode sometimes both, with parity or without parity. In this article, we will be describing various levels of RAID servers and also providing a solution for RAID Hard drive data recovery. So, let’s begin.

Mirrored RAID stores the data that are saved in two drives and gives the ideal duplicate. It also decreases the capacity of the RAID because everything saves twice, this is the perfect fault-tolerant solution. It allows for faster read time because two simultaneous read requests can proceed freely. Opposite of this, write consume more time because the data saved twice.

It breaks data flow into multiple blocks of a particular size with a powerful read and writes throughput. It is often used with parity to check the errors.

This technique uses striping with the checksum method. A parity bit added to the end of the data string that is used for error checking and it only checks errors but does not correct them. In case of any drive failure, missing blocks can be recalculated easily from the checksum.

RAID combines multiple smaller and independent disks into a bigger storage size. And these disks are consolidated into the array members in various ways called the RAID levels.

Note 1: Don’t ever get confuse between RAID functionality and data backups. Some RAID levels provide redundancy which is different.

Note 2: All the RAID types are based on striping, mirroring and parity or 0 the assorted application of all 3 storage methods.

RAID Implementations in Hardware and Software

RAID can be implemented in two ways, one in hardware and another in software.

RAID gets built-up in different hardware which is as follows:

This is the most cost-effective of all RAID solutions. Nowadays every operating system has inbuilt power of creating RAID. But this may be not for all the RAID levels.

What to do if data is corrupted in RAID Hard Drive?

Well, this question can be easily answered by performing RAID Hard Drive data recovery. Users can use a free RAID recovery software to recover and restore the corrupt data from RAID Hard drive 0, 1, and 5. RAID Recovery Software by SysInfoTools is the best solution for it. This software underpins both RAID-HDD and RAID-VHD and restores data in their original format a defined location. This utility supports GPT as well as MBR partition table formats and fetches data saved in this formats. The utility is compatible with all the operating systems and it has an interactive user interface.

I have described about RAID server and the RAID hard drive in detail, understand them carefully. To recover the corrupt data from RAID hard disk you can also use a third-party utility. 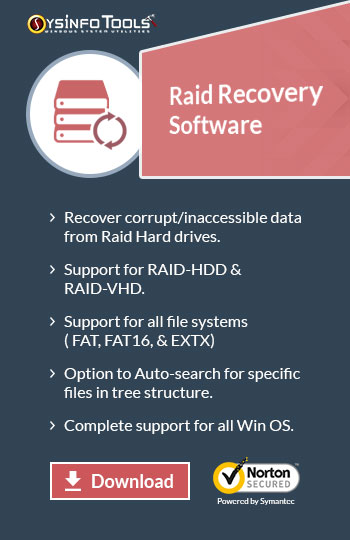