Home  /  Backup and Restore  /  What is Virtual Hard Disk? Reasons Why We Use Virtual Machine

What is Virtual Hard Disk? Reasons Why We Use Virtual Machine

You must have heard about virtualization. Or maybe many of you are using it. In computing, virtualization refers to a process of creating a virtual representation of any device or resource, such as server, storage device, network as well as an operating system. This will let the framework divide the resources into one or more execution environments. It’s one of the most effective ways to reduce IT expenses and boost the efficiency and agility of the organization. In this post, we’re going to discuss Virtual Machine, Virtual hard disk, and its types. Also, we’ll learn how corruption takes place in the virtual hard disk and how to fix it.

Why use Virtual Machines?

The primary objective of virtualization is to increase IT agility, flexibility, and scalability. Also, it creates significant cost savings. Workload gets down through virtualization, while performance and availability definitely increases. Even the operations become automated and simpler to manage. Some additional advantages of the virtual machine include:

In a computer system, the hard disk plays an important role. In the same way, a Virtual hard disk plays an important role in a Virtual machine. It’s just like a physical HDD, and it may contain disk partitions, file systems, and other files and folders. The primary function of a virtual hard disk is to allow multiple operating systems to reside on a single machine used as a host system.

This VHD type is allocated to the size of the Virtual disk drive. It contains a RAW disk image followed by the VHD footer (512 bytes). It occupies the physical HDD space automatically on the file system of the host machine.

This VHD type has a maximum size but it’s initially very small. Since the size of the VHD file indicates by the maximum, the guest operating system believes that it’s just a regular hard disk. As it adds data to the disk, the VHD file size grows.

Reasons Why We Use Virtual Machine

Virtual machines allow users to run an operating system in an app window on the desktop that behaves like a full, separate computer. You can use them to play around with different operating systems. Popular virtual machines include Virtualbox, QEMU, and others. This article will discuss the reasons to use a Virtual Machine.

For performing the experimentation inside a virtual machine (VM) so that we can install experimental software in the VM without risking the stability of our host computer. Additionally, using a Virtual Machine allows the researcher to experiment with open-source network simulation tools. That runs on various operating systems such as the different versions of Linux or BSD without having to install these new systems onto his or her computer. The researchers may also run their usual operating system and productivity software on the host computer while experimenting with open-source network simulation tools that are running on a guest operating system inside the VM.

Virtual Machine applications allow the user to suspend the virtual machine and save their state. This allows the researcher to save their work in a specific state before shutting down the VM. For busy professionals or students, this is very useful. One can switch to another task or shut down one’s host computer and then, when it is time to start experimenting with the Open-source network simulation tools again, one can start the VM in the same state it was in when it was stopped, with the guest operating system and all programs running as they were before the VM was stopped or suspended.

VM applications allow the researcher to take a “snapshot” of the current configuration of the Virtual Machine. If the researcher causes an unrecoverable problem in the VM by making a mistake installing software, he or she can easily revert to a previous snapshot of the VM.

When evaluating and experimenting with potentially unstable software there are chances that a researcher will do something that causes their system to become unstable and that might require significant time to resolve. In such a case, it would be nice to be able to go back in time and start again from a known stable configuration. The snapshot functionality in the VM application, combined with a regimen of taking snapshots before installing or modifying software, will reduce time spent recovering from problems caused by errors or software defects.

Once the guest operating system has been installed in a VM and all the applications and configurations are completed, the VM can be saved as an “appliance”. This appliance can be used later on by another researcher, or a student, and can be easily copied and used on another computer.

Let’s take an example here if a researcher creates a complex configuration in a virtual machine that allows him or her to experiment with particular networking technology in a complex environment. Once he completed setting up and debugging this configuration, the researcher can save the VM appliance for future use or use by another researcher.

Is your Virtual Hard Disk VHD or VHDX?

A Virtual hard disk is saved either with VHD or VHDX file extension. VHD is the older while VHDX is the newer file extension used by Microsoft Virtual PC and Virtual Server. VHD is supported by Windows 7 and earlier versions. On the other hand, VHDX is supported by Windows 8 and Windows Server 8 operating systems. VHDX has new capabilities like performance improvements, data corruption prevention mechanisms, and a 16TB maximum allowable size.

Though the new VHDX file has data corruption prevention mechanisms, it’s not completely immune to corruption. Sometimes corruption may occur and cause inaccessibility.

In a case of corruption, you’re most likely to receive the above error message. There are many reasons behind corruption in VHDX files, such as virus infection, storage media failure, software malfunction, improper system shutdown, and much more. In such a situation, you must employ a professional VHDX Recovery tool to fix corrupt VHDX file and to recover maximum possible data from it.

Why should you use VHDX Recovery tool?

If the VHDX file is corrupt and you don’t have its backup, the only way to restore your data from it is through a 3rd party VHDX Recovery tool. Below are the prominent features of this tool:

The above write-up is describing the reasons to use a Virtual Machine. As you can see that VM is of great importance allows users to run an operating system in an app window on the desktop that behaves like a full, separate computer. All the reasons have been described in detail. I hope it helps to resolve your query. 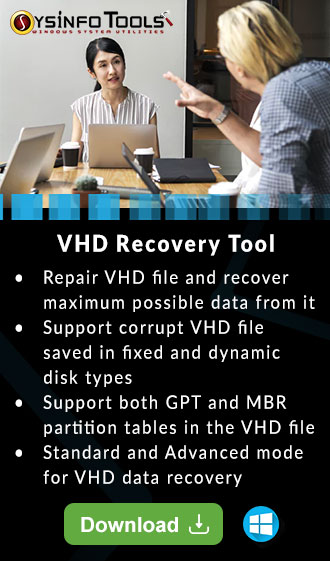