The Reason Behind SQLite Corruption and its solution

SQLite is one of the most popular relational database management systems. The lite in SQLite means lightweight resource in terms of database administration and setup. It is extensively supported by a number of the embedded system, operating systems and browsers and many more.

As we know that the application is an open source so it doesn’t utilize any particular file extension. Due to its complex file structure SQLite database is also prone to corruption.

Whenever the SQLite database got corrupted it means all its data becomes inaccessible.

Let’s see and discuss some of the most common reasons for corruption of SQLite database file:

As we all know that SQLite files are just like any other files, thus overwriting is very much possible. Additionally, several issues may arise like as:

File locking is another exciting feature of SQLite through which you can lock the files of the database. Sometimes many undesirable changes take place while working with two different processes which ultimately cause data corruption.

Many times, we have seen that the sync command does not work properly and acts as a barrier despite making the syncopation and this may also lead to file corruption of SQLite. This process is called the VIOLATION OF acid property.

Any unforeseen changes in data /content of your hard disk drive of any other file may increase the level of corruption in the SQLite database. Further, if your SQLite is running out of storage space then it may also lead to corruption.

How to Fix SQLite database corruption

For recovering SQLite database you may use two different processes:

Step 1: Firstly, launch the Database browser for SQLite on your computer. Then press on the Execute tab of SQL to start the database check in command.

Step 2: Now write PRAGMA integrity check in the command prompt and then press the Play button.

Note: As the database file got corrupted then you may see such error message(s).

Step 3: Now press the File button on the taskbar. Take the cursor to the Export options and then press on SQL file…

Step 4: Press On the Export SQL dialogue box, choose the objects which you want to export. However, you can also select other options as well to export the objects.

Step 5: Now, you can import the database file and tick to the Import options and click Database from SQL file. This will resolve the corruption of minor issues.

But if you feel that the corruption is severe, the manual method is not working then in this condition you may use a professional recovery solution. And in this case, SysInfoTools SQLite Database Recovery works as a great solution. The software successfully recovers and restore all the issues of the SQLite database. Users can even Troubleshoot and Fix SQL Server Error 823?

This particular blog summarizes information regarding one of the very commonly encountered issues of SQLite Database. The blog also describes the best way to resolve this corruption issue along with the reasons that cause this error to come up. 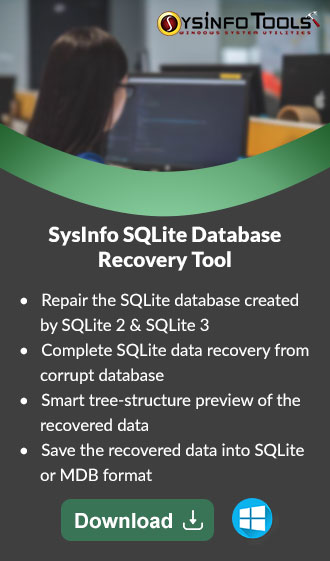