Almost everyone has faced data loss situation at some point in their lives. It’s not wrong if we say data loss seems unavoidable, although you can prevent it with some precautions. If you delete some data by mistake or intentionally, you can restore it back if it was a temporary deletion. However, in the case of permanent deletion, data recovery becomes a little complicated. You can do absolutely nothing if you’re a novice computer user having less or almost no computer skills. Thanks to data recovery software and services which help you recover lost data from the hard disk drive. But sometimes data recovery seems impossible, even for a data recovery expert. I’ve seen a lot of users asking if they can really recover overwritten files. Well, the answer is NO. In this article, we’re going to discuss why it’s not possible to recover overwritten files from the hard disk.

You should understand why data can’t be restored after being overwritten.

How Does a Hard Disk Store Data?

Since data is stored on the physical level, there’s no way to restore it back after being overwritten. Why? I’ll explain to you in this article. First, you should learn how hard disk drives store data and information. You must be aware of this fact that computer information is stored digitally in the form of bytes where each byte contains 8 bites. And each bit has a particular value, either 0 or 1. Since it uses two symbols, i.e. 0 & 1, such way of storing data is known as the binary numeral system. As a result, the data stored on a computer system is written in the binary code, a string of 0s and 1s.

Hard disk drives store your data magnetically and in a non-volatile manner which means it requires no power to maintain the stored information. Every magnet has two poles, plus (+) and minus (-) which equal two values in order to represent the binary code. The storage unit of the hard disk aka platter contains a ferromagnetic surface subdivided into small magnetic regions. These regions are called magnetic domains. The hard disk drive stores data by directional magnetization of the magnetic domains. Each magnetic domain can be magnetized in one of the two possible directions. As a result, each magnetic domain represents one of the two values, i.e. 0 or 1.

To store data on the hard disk drive, two different technologies are used. Before 2005, the layer on which the data was stored, was oriented parallel to the disk surface, i.e. horizontally. It means the binary code was represented on directional left v/s right magnetization. In 2005, a new technology came into existence that wrote data on magnetizing segments vertically, i.e. up v/s down. It enabled larger storage capacities and closer magnetic domain spacing.

You Can’t Recover Overwritten Files. Why?

There has been a long-standing debate on whether it’s possible to recover overwritten files or not. Some people believe that there might be some tools which can recover the data. While others believe that it’s just impossible to recover overwritten files. Generally, what happens when you lose your data due to accidental deletion or corruption, you can restore it back if the hard disk hasn’t been overwritten with the new files. That’s why it’s so important to recover lost data as soon as possible before the hard disk gets overwritten.

There is no chance of recovery with overwritten clusters. While the data is being overwritten, it’ll re-magnetize the magnetic domains on the hard disk. Since it’s an irreversible process, data recovery from an overwritten hard disk is impossible. It physically removes the information previously stored in the same location. Theoretically, some residual physical traces of the changes are still there in magnetization allowing you to perform partial recovery. Although a partial restore is possible, you need to use a magnetic force microscope or any other similar technology. Also, there’s no guarantee of success. Even no software tool can help you recover overwritten files from the hard disk.

How to avoid data loss?

Whenever you face a data loss situation due to any reason, be it accidental deletion or corruption, you should try your best to recover lost data before the hard disk may get overwritten. Make sure you never let the hard disk gets overwritten with the new files. By doing this, you can achieve best data recovery results. If you have the backup, you can use it to restore your data. But if you don’t have any backup, you should go for a professional recovery solution. Simply research online and analyze the different prospects offered by various data recovery companies. When it comes down to choosing a hard disk recovery tool, you’ll find a wide range of options. But a 3rd party data recovery tool can only work if the hard disk hasn’t been overwritten with the new data.

SysInfoTools Software is one of the most renowned data recovery companies in the world. It provides Windows Data Recovery tool with the demo version for a free evaluation. If you face a data loss situation ever and you want to recover lost data as maximum as possible, you should definitely download this tool. It can recover your data after the accidental deletion (permanently) as well as corruption. Even you can use this software to recover lost data after the hard disk failure. Here are the top 6 common methods of hard disk failure.

If you think that the hard disk has already been overwritten with the new files, no 3rd party tool can really help you. Only a valid backup file can save your data from getting lost. To avoid data loss situation, you should take regular backup of your computer data. 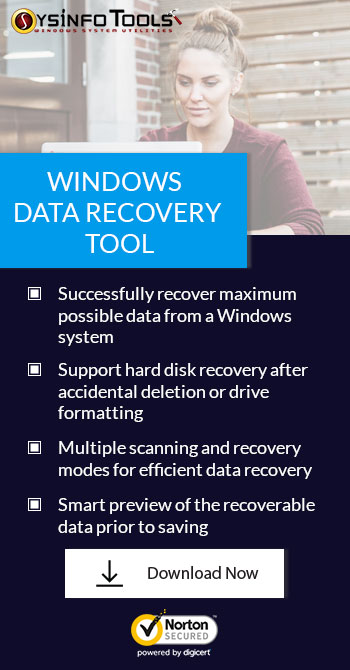