How to Convert VMDK Files to VHD Formats?

Do you get stuck with VMDK files and wish to convert VMDK Files to VHD formats? To migrate from VMDK to VHD, one must learn the basics of the two file formats VMDK and VHD file in detail. There are two kinds of tools that permit users to extend the utilization of the hardware i.e, VMware and Hyper-V. Know more about both of them in this detailed guide.

Moving on to the introduction of two file extensions respectively. You can read here major difference between VHDX and VHD file format.

What Do You Mean by VMDK File Virtualbox?

VMDK is also referred to as virtual machine disk, that is generated by VMware machines. A virtual machine can easily replicate a computer system and provide attributes as well. A .vmdk file can save the whole data to a hard drive and can further be utilized as a uniform hard drive or backup device for important files. With a VMDK file, one can save upto 2TB of information. However, using VMware vSphere, one can save almost 62 GB of data. Several VMware products utilize VMDK file format, such as:

Also, there are a variety of third-party applications that utilize the same file extension. Lets read here the difference between VMWare and VirtualBox.

What Do You Understand About VHD File?

A VHD file is formerly renown as Virtual Hard Disk. It was first introduced by Connectix for virtualization, but in 2003, it was bought by Microsoft. In 2005, VHD format was available to third parties under Microsoft Open Specification Promise. A VHD can work as a traditional physical disk to download OS, generate files/folders, open applications, etc. Also, the VHD file does not have any file size restriction and can further be controlled by a virtualization manager. If anyhow your VHD file have corruption issues you can repair them easily with the help of VHD Recovery software.

Now, let’s take a look at what requirements users need to make sure before converting VMDK to VHD Virtualbox.

It is a self-sufficient utility built for IT professionals or solution providers who wish to update themselves using Virtual Machine Disks to Microsoft’s Hyper-V hosts and Azure. Users who feel the need to migrate physical machines/disks to Hyper-V hosts can also utilize this utility.

Moreover, it is compatible with Windows PowerShell that permits a user to automate conversions and merge them with data centre automation workflows. As one can observe, it is the brand new variant of Virtual Machine Converter, Besides, it comprises online migration of physical machines to virtual hard disks.

Now, let’s have a look at the process to convert VMDK files to VHD formats.

One must also know the reasons for the conversion of VMDK to VHD files.

There can be various causes behind the need for VMDK to VHD conversion. Suppose you wish to migrate from VMware environment to Microsoft Hyper-V, then you must transfer VMDK file VHD format. If an individual is utilizing Azure cloud service, then to export VMware load to the cloud, he/she must try to  Convert VMDK to VHD Virtualbox format.

This article defined the ways to convert VMDK to VHD files. Besides, there is no alternative approach available to export VMDK files. Although, users can utilize the manual strategy to attain the VMDK backup in VHD format. Either way, the user can face issues while performing the manual approach. So, he/she can try using the automated approach to recover VMDK file data by taking the file backup. 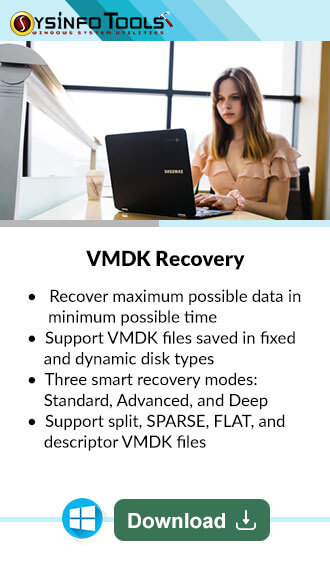