A file system used by the hard disk drive, be it FAT or NTFS, is prone to severe issues including data loss due to accidental deletion and corruption. If you’re having a valid backup file, there’s nothing to be worried about your deleted files or lost data. You can easily restore them from backup. If there’s no backup, you must try NTFS Recovery software to recover maximum possible data from corrupt volumes/drives containing an NTFS file system.

Data loss is one of the worst situations computer users can ever face. Sometimes it may happen all by itself, and sometimes due to human errors. Corruption is certainly unwanted by an inevitable occurrence which can cause data loss for sure. Accidental file deletion and volumes/drives formatting are included in human errors. We’ll discuss the reasons in detail later.

There can be a situation when some of your data and files become inaccessible or get deleted from the system due to any logical or physical failure. All the data including operating system file and other important system files are stored in a hard disk drive which uses file systems. A file system is primarily used to record and store data on a hard disk drive of a computer system. NTFS (New Technology File System) is a standard file system developed by Microsoft. Several technical improvements have been done on NTFS to make it better than FAT (File Allocation Table) and other file systems including HPFS (High-Performance File System).

Why is NTFS better than FAT?

NTFS has many advantages if compared to other file systems like FAT. The key advantages are given below:

The aforementioned key advantages make the NTFS file system more popular than any other file system used by computer users. That’s why most of the users prefer NTFS rather than FAT to format their new partitions. Even users, who were previously using the FAT file system, are now converting their partitions from FAT to NTFS.

The only helpful thing to recover deleted files and other lost data is a valid backup file. The backup file gives you data security against any type of data loss due to accidental deletion as well as corruption. If you’re having backup file, you can recover deleted files and other lost data from it. It contains copies of your data which you’ve backed up earlier. But this situation becomes more challenging if there’s no backup file. In such a situation, NTFS Recovery software can help you.

SysInfoTools NTFS Recovery Software has been smartly programmed to perform effortless data recovery from volumes and drives containing NTFS partition. Such recovery software is highly efficient to recover maximum possible data from a hard disk or other external storage drives.

NTFS Recovery software is the best solution one can have. It uses an advanced powerful recovery algorithm so that data recovery operations can easily be executed without having any problem. It contains numerous features (discussed below) which make the entire operation easy, safe and extremely convenient for any user, be it technical or non-technical. 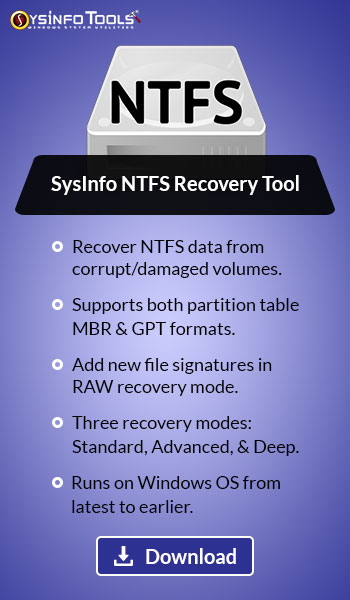