A Brief on Virtual Disk File System & Their Recovery

File System basically controls the storage of data, without which stored data would be one big body of data unable to identify where a piece of data starts or stops. So, by separating the data into number of pieces and providing each piece with name, the information is easy to find. Giving it a name the way paper-based file system are named i.e. group of data is called "file". In computer terminology, File System is used to handle the storage and retrieval of data, structure and logic rules are used to manage the groups of information.

There are many different kinds of file systems depending upon the Operating System, each one has different structure and logic, properties of speed, flexibility, security, size and more such as FAT, FAT16, FAT32, FAT64, HFS+, EXTX and NTFS etc. File System are used on numerous different storage media such as flash media, optical media, magnetic tape etc. In some cases, used as a temporary file system for computer main memory i.e.RAM.


Some file systems are used as Virtual Files merely computed on a request or used for backing storage. Disk Partition is another approach of maintaining several file systems on the bases of allocation table such as GPT and MBR formally called "Partitioning Schemes" that can be of Fixed or Dynamic disk.

Disk Partition in other words "Disk Slicing". Partition of disk is creation of one or more regions on a hard disk or another secondary storage, so that an operating system can manage information in each region separately. Each partition appears in the operating system as a distinct logical disk that can use part of the actual disk. When a hard drive is installed in the computer, it has to be partitioned before being used or formatted. Partitioning a drive is when the total storage of a drive is divided into different pieces. These pieces are called partitions. Once a partition is created, it can then be formatted so that it can be used on a computer. Disk Partition save our files from being corrupt, meaning if some data of one drive gets corrupt then other drive's data id totally safe and it become easy to recover the files from the drive or format it.
Disk Partition is done based on two scheme such as MBR(Master Boot Record) and GPT(GUID Partition table) used by Windows. Macintosh OS uses "Apple Partition Map" partition scheme
Generally, MBR and GPT determines the style of the disk between MBR and GPT. After it is initialized and called by a disk as MBR disk or GPT disk. These two different styles of disk own different schemes to manage the partitions on a disk. The differences between them cause rapid development of the information age.

Master Boot Record is kind of boot sector from the very beginning for partitioning computer mass storage device like removable drive or fixed disks. The MBR holds all the information on how the logical partitions, containing file systems, are organized on a medium. The MBR also contains the executable code to function as a loader for the installed operating system. The first sector in MBR is boot sector which consists of the information about boot loader. That means it knows where the Operating System is located and loads it on to the RAM., when you start the computer. An information table tracks partitions, the disk has been formatted into. Hence it is also referred as ‘Master Partition Table’.

GUID Partition table is a standard layout of the partition table on a physical storage device, such as a hard disk drive or solid-state drive, using globally unique identifiers (GUID). this is a new disk architecture that expands on the older MBR partitioning scheme that has been common on Intel-based computers. It uses a long unique string GUID to find each partition. These strings are random and long so that no two partitions can have the same GUID. 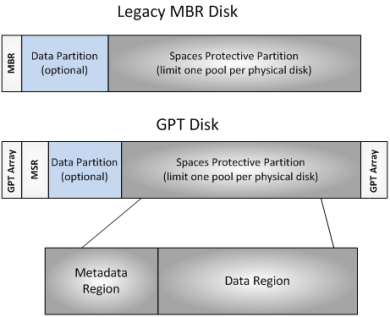 Fixed disk type is a Basic disk storage types most often used with Windows. The term basic disk refers to a disk that contains partitions, as primary partitions and logical drives, and these in turn are usually formatted with a file system to become a volume for file storage. A fixed-size disk is a file system, which has its full size pre-allocated on the drive or physical host volume. For earlier compatibility, basic disks uses the same MBR partition scheme, generally used by the Microsoft MS-DOS operating system and all versions of Windows but can also support GPT partitions. To add more space to existing primary partitions and logical drives is done by extending them into adjacent, contiguous unallocated space on the same disk. To extend a basic volume, it must be formatted with the NTFS file system.

Comparison of different Partitioning Schemes and Disk Type it supports

Cause of File System Corruption

One of the most common problems that can occur within the computer is the problem with storage device or File System, that may prevent us to access our meaningful data. Due to file system corruption, virus/ Trojan attack, registry damages and many other, primary hard drive partitions may become RAW.


What is RAW Files?

RAW files are collection of unprocessed data, means the file has not been altered, compressed, or manipulated in any way by the computer. Raw files are often used as data files by software programs that load and process the data. A popular type of raw file is "Camera RAW", which is generated by a digital camera. There are multiple reasons involved in making healthy partition or Drive into RAW. Healthy partition acts as controller of your computer device and monitors all the inputs and output requests. Due to installing any malicious third party programs, bad handling file system drive or partition or file system became RAW.

Some Symptoms of file getting RAW

Now knowing all about what is File Systems, we come to conclusion that there are two approaches in which file system may be used in a system.
First Approach
Computer systems can be configured with a single file system occupying the entire storage device or drive i.e. maintaining all data in the form of one particular file syetem likely NTFS is supported by Windows OS. Maintanence of the entire data in single machine at times due to virus attack or disfunction of the system a particular file may get deleted or get missing. The Best way to Recover deleted files is using a SysInfo File Recovery Software. 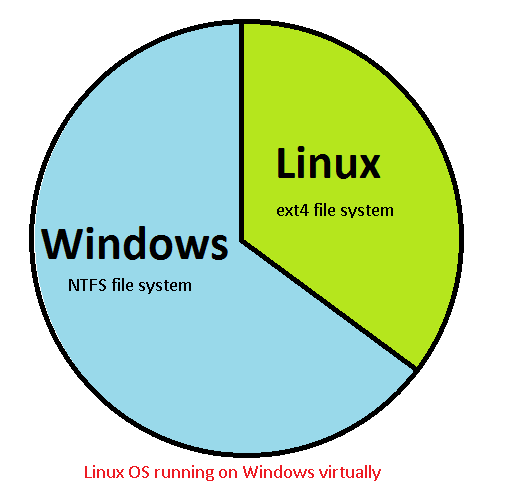 Another Approach used as disk images for additional file systems, which may called as "Virtual Image", within same host as a file. For example is virtualization one user can run an Linux(ext4 file system) in a virtual machine on Windows environment which uses NTFS file system. The ext4 file system is in the form of disk image, which is treated as a file (or multiple files, depending on the hypervisor and settings) in the NTFS host file system. Appraoch of using the file system as virtual images which have various adavantages over using it as a single file system, similarly can be prone to corrupt virtual files or any kind of corruption that can be rectified using SysInfo Virtual Disk Recovery Tool Kit to fix all the files that has been corrupted.