Is There Any Difference Between Office 365 and Office 2016?

This article is providing you with the difference between office 365 and office 2016. If you are looking to purchase Microsoft Office for your business, you’ve got plenty of options. But understanding the difference between the options – most notably between Office 2016 and Office 365 – can be confusing. So, through this blog, I will let you know what are the major differences between the two and which version is better for you to buy. Before moving further let’s first know about Office 365 and Office 2016. So, here we go.

Office 365 provides a cloud-based office solution using subscription plans.  It permits access to a variety of cloud services and Microsoft’s office applications which can also be installed locally across multiple devices to allow for working offline. It is a compulsion for users to have a Microsoft Account in order to gain access to Office 365. Depending upon the subscription plan, Office 365 lets users work in the cloud or locally.

Office 2016 is Microsoft’s latest version with access to OneDrive for cloud storage.  Office 2016 applications such as Word, Excel, PowerPoint, Publisher, and Access can also be installed as separate apps if there is no requirement for the entire office suite. The applications totally depend on the type of bundle you purchased. For example, Office 2016 Professional is the full office suite whereas Office 2016 Home and Student is a lighter version that excludes some applications.

Office 2016 suites comprise of Word, Excel, PowerPoint, and OneNote as a one-time purchase for use on a single PC. In its business alternative, users can also get Publisher and Access in addition to the previously mentioned applications.

While Office 365 plans come in monthly or yearly subscriptions. It includes the complete suite of Office applications along with other services over the Internet including more cloud storage with OneDrive, as well as Skype minutes for home use. Many Office 365 plans also provide you the offline versions of apps such as Word, Excel, PowerPoint, etc., One can install them on PCs, Macs, tablets (including Windows, iPad, and Android) and smartphones.

Although they will give you all the security updates for free, Office 2016 clearly loses on this front. That’s because its applications aren’t automatically updated when a new version comes out. While some people are happy to remain with their outdated Office apps, but this is not reliable for everyone. If you want to update your Office 2016 when a new version is out, you have to purchase it again. You also won’t get any new features that are added to Office 2016 post-purchase, which might create an impact on you or not at all.

Whereas, the Office 365 subscription always provides you monthly updates and major version upgrades at no additional cost.

Now, this is a crucial term, you have to understand which tech support is better, Office 2016 or Office 365. And this is another facet where Office 2016 is at a clear disadvantage. If you purchase an Office 2016, you get support on an install-level only. And if you have an Office 365 subscription, all tiers include 24/7 support for technical issues, or for subscription and billing support.

Hence, with Office 2016, if you have a problem that is not related to your installation, you’ll have to solve it yourself. Whereas with a subscription, Microsoft will help you resolve it.

If you are looking for Outlook, Publisher, Access, 1TB of OneDrive storage, 60 Skype minutes a month, Office apps for tablets, and the ability to switch between Windows and Mac. Then you should choose Office 365,  also it is cheaper to subscribe to Office 365 for a year.

If you like to upgrade every time a new version of Office comes out, then you must get Office 365. If you know you’re going to be happy with Office 2016 for more than two years and these limitations don’t bother you, then it may be a better deal to stick with Office 2016.

If you need more than one copy of Office, Office 365 Home seems like a much better deal. Office 2016 will be a better deal if you keep using Office 2016 for more than seven and a half years, which seems unlikely. You will need Office 365 if you want full access to Office on tablets as well as a PC or Mac.

And the answer is a straight no, the Microsoft Office 365 does not create a backup of your data. The backup and recoverability that Microsoft provides and what users assume are different. Microsoft Office 365 provides geo-redundancy, which protects the user’s availability, not their data. If this issue occurs, they will not experience an interruption in their service but it will not protect users from data loss.

So, in such a situation you can opt for the third-party tool for hassle-free backup. Well, you can easily accomplish this task by using an automated tool like Office 365 Backup. This utility is designed to create a backup of Office365 emails into PDF, MBOX, EML, and other file formats with great ease. Not only this but also it can restore Office365 Mailbox into the user’s profile. Additionally, it backup Emails, Contacts, Schedule Meetings, and Calendars of Office365.

The above article is describing the major difference between Office 365 and Office 2016. Additionally, there is a comparison between which one is better for value. So, now it’s totally up to you to select the right one for you. I hope it helps. 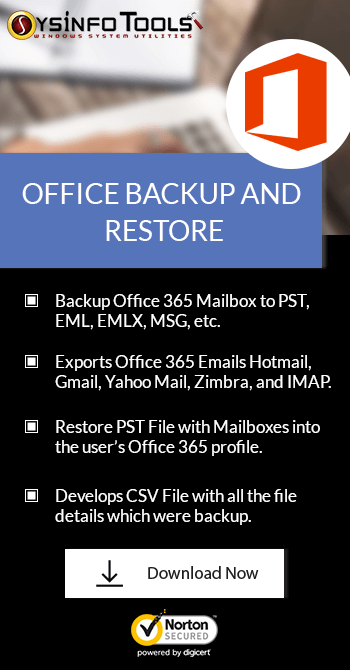